Sunshine Coast offers some great events throughout every semester and we have collected a few of these here on our blog. Make sure to check them out, and we guarantee you, there’s something for everyone!

Are you ready to indulge into some of the best desserts that the coast has to offer? It’s time to prepare your taste buds, and for just $10 entry, you get access toJust $10* gets you access to loads of dessert food truck, live music all day, dessert wine tasting, dessert demonstrations, and 30+ artisan markets from the Sunshine Coast Collective Markets. There’ll be brownies, chimney cakes, donuts, ice cream, dessert dumplings, crepes, lollies and much more. What are you waiting for? Join the fun!

The Noosa Festival of Surfing is the biggest surf event in the world (by competitor numbers) with more than 900 competitors from almost 20 countries and regions. If you’re keen on adventure sports, Noosa is the place to be on these dates. With an age division for everyone and professional divisions attracting the best surfers from all over the world, the Noosa Festival of Surfing is not to be missed! Visit the link above for more information. (info)

6. Nitro Circus You Got This Tour

Want to see some real action? The You Got This Tour is an explosive, high-adrenaline action sports spectacular starring the best athletes in FMX, BMX, Skate, Scooter, and more. Don’t miss your chance to see riders at the top of their sport including Ryan Williams, Vicki Golden, Blake “Bilko” Williams and many more. Find out more in the link above! 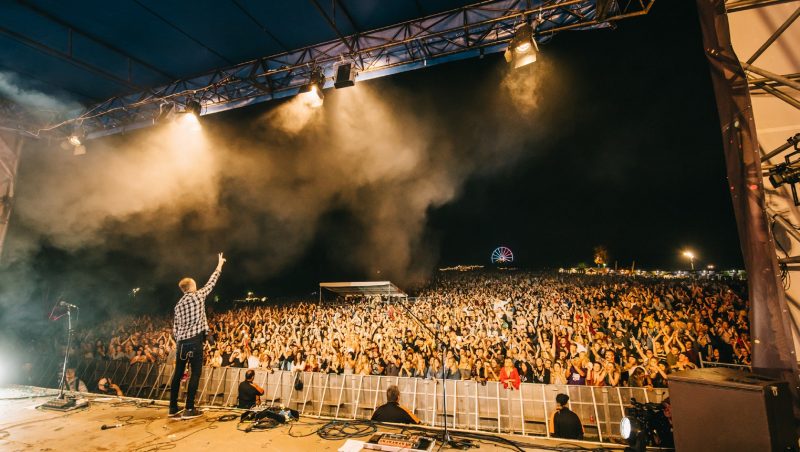 Definitely a must-go, especially if you are new to the Sunshine Coast! The Big Pineapple Music Festival is an annual highly successful, award-winning live music event held at the historic Big Pineapple, in the Sunshine Coast Hinterland. People are also able to camp at the Big Pineapple fields, with an inclusive ticket deal. Last year’s event sold out in record time and with 2020 shaping up to be even better, so make sure you sign up for the presale and get yourself sorted to jump when those tickets drop! You can read more about this event in the link above.

Sunshine Coast’s Big Pineapple Music Festival is held every year in May and is the biggest festival on the Coast. With well-know local and Australian artists such as Peking duk, Broods and PNAU headlining in 2019, The festival has steadily grown in profile and popularity, and is regularly sold out. With a growing list of annual events, The Big Pineapple Music Festival is now an event of national standing, having been awarded one of Australia’s top regional music festivals!

Held every New Years Eve, Woodford Folk Festival is an annual music and cultural festival held near the semi-rural town of Woodford, 72 km north of Brisbane. It is one of the biggest annual cultural events of its type in Australia where approximately 125,000 people attend the festival every year. With approximately 2000 performers and 438 events, this festival is featuring local, national and international guests.

Fairly new on the market, Festival X which kicks off on November 29th in Brisbane, will feature some huge headliners such as Calvin Harris, Armin Van Buuren and Lil Pump, the perfect mix for those who want to experience some top American artists. Australian artists such as Alison Wonderland, Anna Lunoe and Godlands will also be there to give you the real Aussie experience, so you really just have to book a ticket and see for yourself – you probably won’t be disappointed!

Splendy, what should we say? This is definitely the festival for all ages and people, and there is so much to do that we could have spent a whole day writing about it. Held in the North Byron Parklands every July, the 2019 version featured some of the greatest artist on this planet. Experience some of the best Australian and American artists, visit the Tipi Forest, Global Village, The Bohemian Lounge, The World Stage, and much much more! The opportunities are endless and there’s no question about why this festival attracts people from all over Australia and even internationally. You just have to experience it for yourself, it’s something unique!

Starting it off with Splendour in July, there is not time for withdrawals having Falls Festival right around the corner. Similar to Splendour (except from being held in the middle of the summer and you’ll probably be sweaty all the time), Falls this year will feature Halsey, Vampire Weekends, and Peking Duk (even Lewis Capaldi!) so this might be something you don’t want to miss out on. What better way to celebrate the New Year right?

Listen Out, this is one of our favourites! Held every September/October (yes, it’s right around the corner!), this festival will bring you dance, electro and hip hop with artist such as 6lack, Biscits, Cosmo’s Midnight, Denzel Curry and Diplo. Being a popular festival for Sunny Coast people, in addition to The Big Pineapple Festival, this festival will give you more of a city-vibe. With two stages, you can easily move from one to the other if both of your favourite acts are on! Accommodation is normally easy to find being that it’s located in the heart of Brisbane, but be quick – it’s always sold out!

We’ve lost count in terms of how many new festivals there are this year, but we are not complaining! Event though Grass is Greener has been around since 2016, it has recently picked up here in Queensland and will be kicking off on the 19th of October in Gold Coast. Tyga will be headlining along with Amy Shark, Hermitude and The Veronicas. If you already know you won’t be able to make it to Gold Coast, they are giving you a second opportunity to experience the festival in Cairns on the 26th. To us, it is not too expensive and definitely sounds like the grass must be greener at that festival, considering their line-up.

Wildlands is a brand new, unique one-day dance festival. Happening at the end of December, Wildlands is the brain child of two of Australia’s most loved festivals. Beyond The Valley and Origin Fields founders have promised the biggest and most exciting dance, electronic and hip-hop acts, both national and international. This year’s lineup will feature sets from RÜFÜS DU SOL, Tyler, the Creator, Skepta, Ella Mai and Green Velvet (info). With tickets around 170$, we believe this might be a good hit for those who don’t want to spend heaps of money on a three-day festival, but would still like to experience the best of the best right before New Years!

ULTRA came to Australia for the first time in 2018 featuring some big artists such as Martin Garrix, The Chainsmokers and Marshmello. ULTRA originally being from America, the festival has now made itself popular on the Australian market. With March 7th & 8th on the schedule for next year, we recommend making it a long-weekend trip to Sydney or Melbourne to get the whole package!

Who experienced FOMO last year when missing out on Cardi B and Fisher performing? In saying that, this year might also live up to you expectations as we have Green Velvet, Dom Dolla, RL Grime, Skepta and many more performing – this is definitely scoring high on our top list of music festivals 2019! Celebrate the first day of 2020 with your friends in Sydney and experience the best of our Australian (and some American) performers.

11. Beyond The Valley – Lardner Parklands, VIC

Since it’s inception in 2014, the boutique music festival Beyond The Valley has grown into an annual party-goers haven. Running annually over the New Year’s Eve period, BTV’s carefully crafted selection of local and international artists perform across three distinctly designed, purpose-built stages. Each year, thousands of festival-goers from all over the globe travel to the lush Parklands of Lardner to experience Beyond The Valley (info). This year, (it’s unfortunately sold out), artists such as RÜFÜS DU SOL, Tyler, the Creator, 16BL and Bag Raiders will headline along with many more. Start planning for 2020 and be quick, the tickets can sometimes be hard to get a hold on!

Ever since it’s kick-off in 2005, this festival has provided a groovy atmosphere! Held every year in May, the festival featured some big artists this year with Billie Eilish, Aurora and ASAP Twelvyy. There are heaps of locations to choose from, enabling you to literally plan your road trip everywhere! All of the shows sell out every year, so be quick if you want a hold of some tix next year!

Heads up, Perth seems to be your new NYE plan! Ring in 2020 with Tyler The Creator, Skepta, RL Grime, UK singer Ella Mai and another Aussie favourite, Golden Features. This not-to-miss-out-on festival is held from December 31st to January 1st and believe us, after reading this, you’re probably about to realise that there’s a lot of festivals around NYE. It’s definitely not a bad thing, but you now have a difficult decision to make!

Another new two-day festival which has definitely not been saving any money on artists, featuring LOGIC, Travis Scott and Dean Lewis. They have been met with some criticism being a bit expensive (would explain the lineup), and changing the venue just recently, but we believe with their new 1-day ticket, it’s definitely worth a go! However, if you’re the type of person who hates how 1-day festivals go too quick, this might be the reason to get a hold on that 2-day pass! Save some money and get amongst it, November 30th is right around the corner!

Last but not least, the Laneway festival in Brisbane which featured Cosmo’s Midnight, Crooked Colours, A Boogie Wit Da Hoodie and many more this year. It’s been around 15 years since it first kicked off, and it’s absolutely one of the favourites around Australia. Starting predominantly off as an indie music event, the festival grew in popularity and has expanded to five Australian cities, including Auckland, New Zealand and Singapore. Billie Eilish delivered a mind blowing concert this year, so there’s no reason to believe it won’t be any less next year.